Late summer in South Tyrol is also called the fifth season. In this season, you can enjoy the bountiful harvest of the end of the summer. In Brixen, Bressanone in Italian – that sounds more beautiful – I visit the bread and strudel market. With the panorama of the imposing Dolomites in the background, we sit at the Friday afternoon drink at the Domplatz. 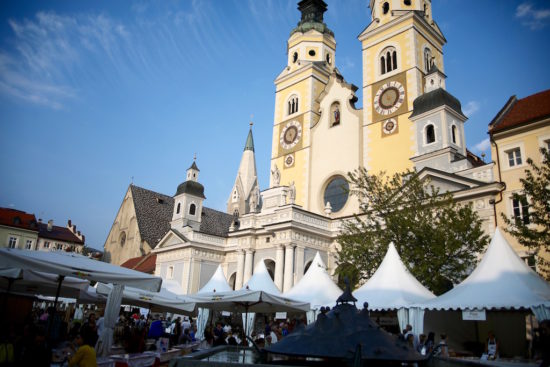 This charming square is decorated for the food festival with food stalls. Local producers invite you to taste their South Tyrolean bread specialties and apple strudel. We toast with a glass of Pinot Bianco on the good life. Salute!

This weekend, I’m looking for the tastiest local addresses in Alto Adige, South Tyrol. It’s the most northern province of Italy bordering Austria. As the residents themselves say, it is the best combination of the north and south. The area is bilingual: German and Italian. Or actually trilingual, because Ladin is an official language. 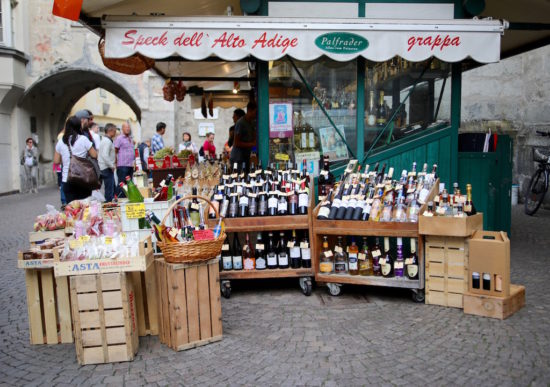 You will find a tasteful blend of Tyrolean and Italian influences. Tasty local specialties are dumplings, schlutzkrapfen, apples, chestnuts, strudel, schnapps (grappa), cheese, wine and of course pasta. With 23 Michelin stars in 2016, this Italian region has the most star restaurants in proportion to its population (500,000).

Vegetables in the lead 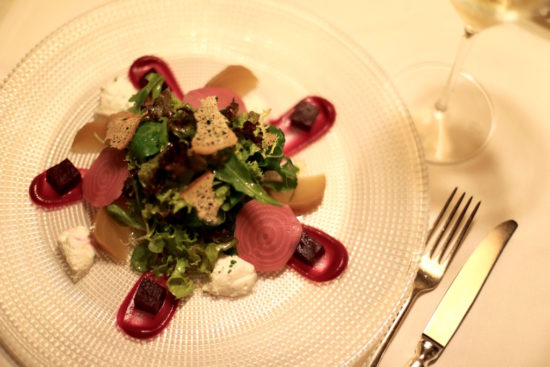 A delicious dinner at Hotel Elephant awaits us in the evening. I choose, as usual, vegetables in the lead. Not only because it is better for humans, animals, and the environment, it also often provides the most colourful pictures. What do you think of this salad with different beet and ricotta? Franciacorta bubbles are delicioso! 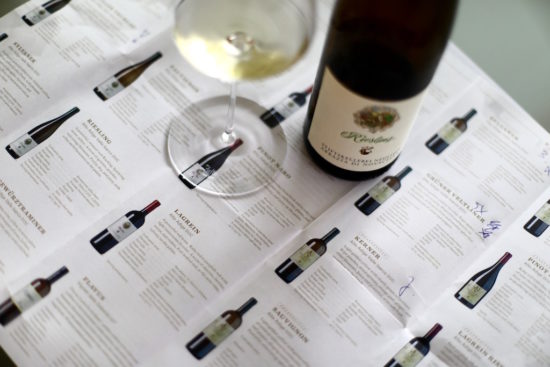 The next day, we go by bike to Novacella winery. This winery has a training centre and a hostel. Since 1992 they have been producing wine through the use of green energy. They achieve this by generating their own energy from water instead of burning fossil fuels, which destroy our environment. The wines themselves are unfortunately not biologically or naturally produced. That is unfortunate because, generally, a lot of pesticides are used in the cultivation of grapes. When I asked about it I get an evasive answer. Many wines from Novacella are purchased by the Vatican. We taste a little too much wine, so I’m thinking I’m at number ten of the white wines. Three red wines follow, and all before lunch. Around 11:00 hours seems to be the best time to taste. My favourites are the Müller-Thurgau, Grüner Veltliner, and red Lagrein. 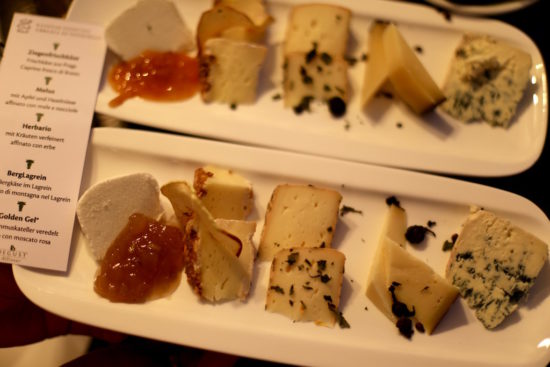 Tasty local cheeses are served at lunch time in the cellar café restaurant. 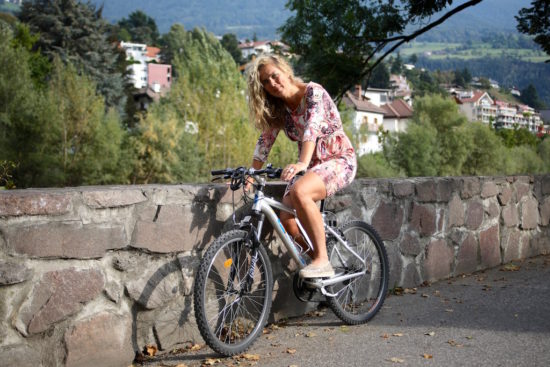 We cycle back towards Bressanone. Along the way, we take pictures of apple trees in the sunlight. South Tyrol, with its mild climate with over 300 days of sunshine, is the largest fruit area in Europe. Especially, apples are favourite. 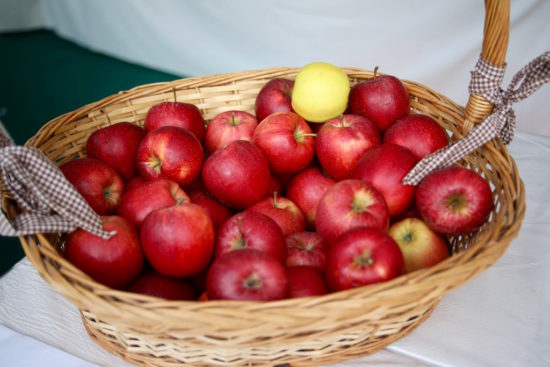 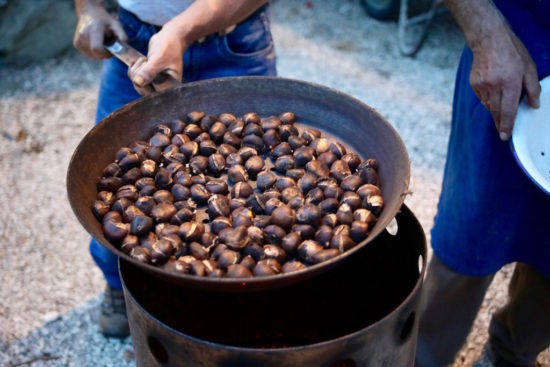 Tonight, we celebrate the start of the törggelen season at Griesserhof. Outside, the chestnuts are roasted upon a fire. Delicious! In addition, we have a young white wine. It’s not real wine yet. With about 4 to 5% alcohol, it is reminiscent of apple juice. Suser called this young white wine. We sit down at the parlours, where we enjoy traditional South Tyrolean peasant dishes like schlutzkrapfen and sauerkraut.

Walking and trails along the Chestnut Road 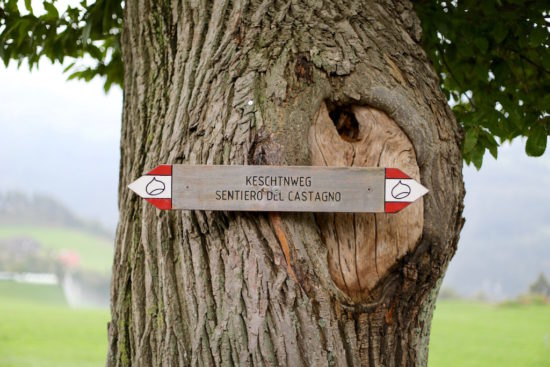 The next day, we go to the mountains. At 900 to 1000 meters altitude, we arrive at Castle Velturno. 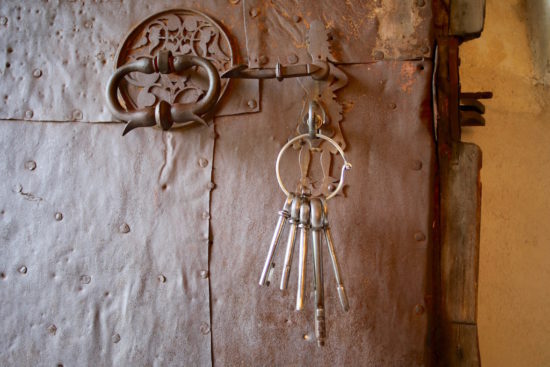 After a tour, we walk along the Chestnut Route. This route is 60 kilometres long. It is ideal for a walking tour of three to four days in nature. Along the way you can stay in a cosy guesthouse and enjoy the delicacies of local food and drink the farms, cafes and restaurants offer. 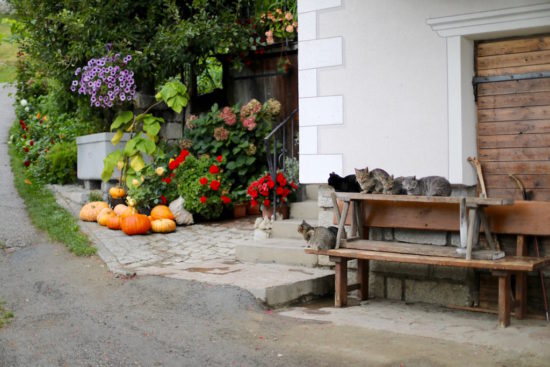 Or you walk part of the route, as we do today. Our first stop is Biohof Radoar to taste organic apple juice and schnapps – made of chestnuts. The apple juice is mostly (90%) made of golden delicious, which makes for a pleasant sweetness. Delightfully fresh and the taste is almost like apple / pear juice. 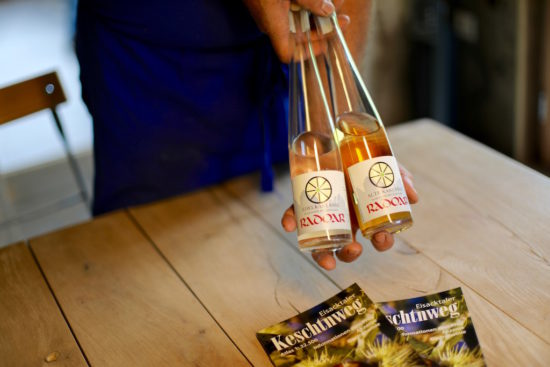 We continue the Chestnut Road until it’s time for lunch. We arrive at Gasthaus Huber in Pardell. Now early October, we still can have lunch outside at a long wooden table in the sun. The beet knödel with gorgonzola sauce is a fine combination. 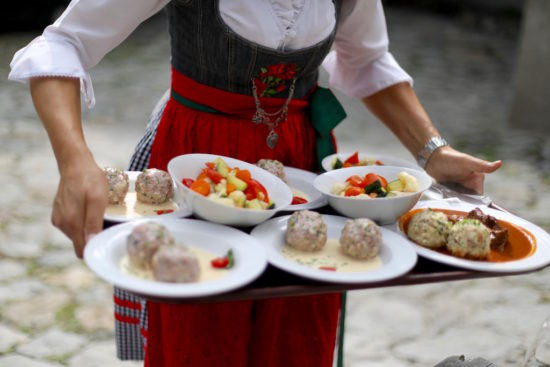 In Klausen (Chiusa), we taste the chestnut beer at Gassl Bräu brewery. 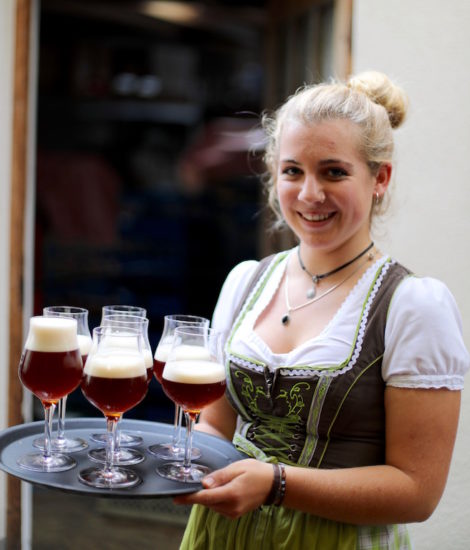 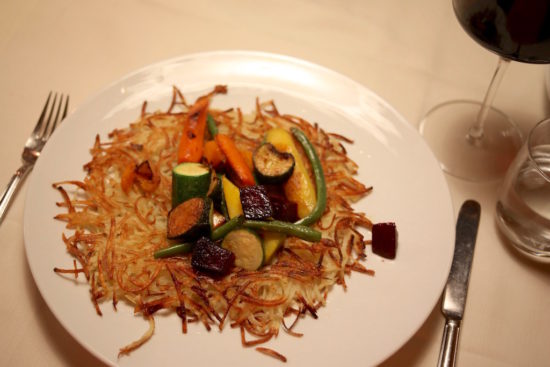 The vegetarian dishes on the menu of Restaurant Fink are signed with carrots. For starters, I choose the antipasti. As the main course, a potato rösti garnished with grilled vegetables. Served with a glass of full-bodied red wine: the Lagrein. My new favourite is made from the same grape. 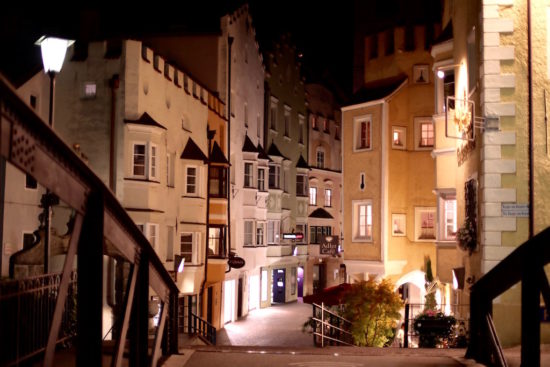 History of Hotel Elephant in Brixen

We stay another night at the Hotel Elephant. This hotel is named after an elephant, which in 1551, by the then Portuguese royal king, was given to an Austrian family. After a gruelling journey by boat from India, and later on foot, the elephant finally arrived in Brixen at the former inn. The hotel was named after the animal after its arrival. After two weeks, the poor animal continued its journey on foot to Vienna, where it died not much later. 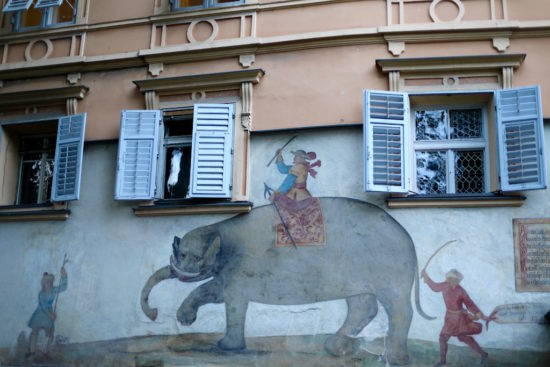 The frescoes on the front of the hotel are a reminder of the elephant. Luckily, it’s a lovely hotel with an eye for hospitality. When I inquired at breakfast if there was dinkel bread, which I had seen on the bread and strudel market, someone went immediately to buy it for me at the bakery around the corner. Now that’s personal attention and service.

Next time I would like to come back in the winter season because then South Tyrol is beautiful with a lot of snow, combined with nature, wellness and a visit to one of the other beautiful places. As Bolzano perhaps?